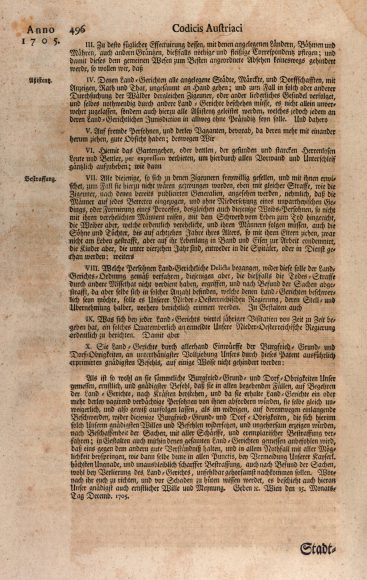 01.2 | Since the 16th century, the policy implemented by territorial lords had been aimed at keeping ‘gypsies’ far removed from their territories, along with other poor, marginalised populations outside of estatist society. As ‘masterless groups’ they enjoyed no rights and no protection. There is a wealth of documented evidence that countless exclusion orders and orders prohibiting entry were issued against ‘gypsies’ and other undesirables between 1500 and 1800. The decree shown here was promulgated by Emperor Joseph I in 1705 and directed against ‘gypsies and dissolute rabble’. The German verb ‘ausrotten’, i.e. ‘to eradicate’ or ‘to exterminate’, actually meant ‘expel’ or ‘drive away’ in the linguistic usage of the day.