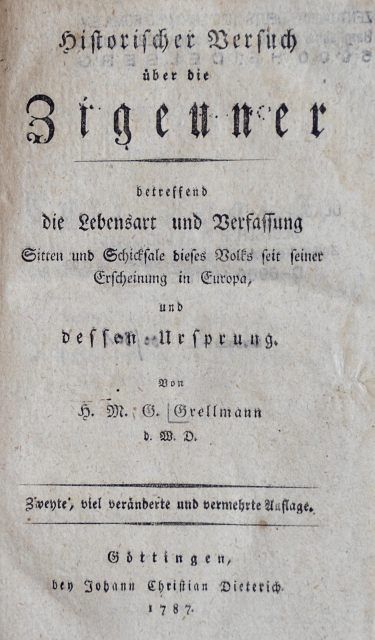 04 | The Göttingen professor Heinrich Moritz Gottlieb Grellmann, an Enlightenment historian, was the founder of modern ‘gypsy research’. The first edition of his book ‘Historischer Versuch über die Zigeuner’ [‘Historical dissertation on the gypsies’] was published in 1783 and subsequently translated into numerous languages; it is widely regarded as seminal. Grellmann regarded ‘gypsies’ as a foreign people at a pre-civilisation stage. He claimed that they possessed ‘anti-establishment’ morals and an ‘oriental mindset’ unlikely to be swayed by education. These negative attributions and interpretations were adopted by other authors. The notion of an essential difference between ‘gypsies’ and the ‘civilised peoples’ of Europe would have a considerable influence on the racist ‘gypsy’ discourse of the 19th and early 20th century.