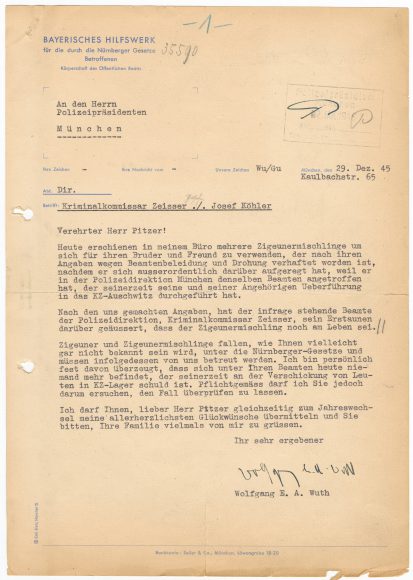 01.1 | By the end of 1945 the Munich police headquarters still had a ‘Department for Gypsy Issues’, and it was staffed in part with the same personnel as during the Nazi regime. Josef Zeiser, the police commissioner mentioned in the document (incorrectly denoted as ‘Zeisser’), had accompanied the deportation train containing Munich Sinti families to Auschwitz-Birkenau in March 1943, together with his superior August Wutz. Witnesses testified that the criminal police officers maltreated their victims during their arrest and transport. On 12 December 1947 a Munich civilian denazificaiton court sentenced Zeiser and Wutz to ten years in a labour camp. But by July 1948 the Appeals Chamber had already ordered their release from the labour camp, and the proceedings were halted in March 1949.