The leadership of the Catholic Church knew about the scale of the genocide that was being perpetrated on the Sinti and Roma. On 5 April 1943, at the risk of his own life, the Sinto Oskar Rose, who was living in Munich under an assumed name, sought an audience with Cardinal Faulhaber at the latter’s residence in Munich. Faulhaber refused to see him. In his private diary he noted: [There came] before the secretary a gypsy by the name of Adler, a Catholic – The 14,000 gypsies in the Reich territory are to be gathered in a camp and sterilised; he wants the Church to intervene. Absolutely wants to see me. – No, unable to offer any prospects of help.’

Some time later Oskar Rose sent two anonymous petitions to the Speaker of the German Bishops’ Conference, the Breslau Cardinal Adolf Bertram, and the Freiburg Archbishop Conrad Gröber. The letters referred unmistakably to the systematic and murderous nature of the deportations of Sinti and Roma families to Auschwitz-Birkenau. The German bishops were also aware of the scale of the state-led extermination policy aimed at the Sinti and Roma from other sources. But they could not bring themselves to stage a joint public protest of the kind demanded by the Hildesheim Bishop Joseph Godehard Machens. 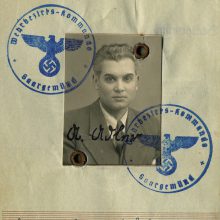 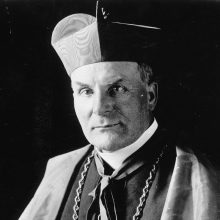 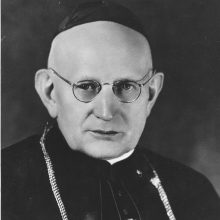 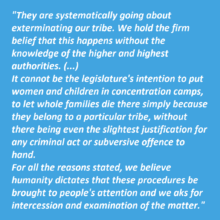 04 | Anonymous petition written by Oskar Rose and addressed to Cardinal Bertram in Breslau [Wroclaw], received on 6 May 1943 Erzbischöfliches Archiv Freiburg EAF, B2-28/12
04 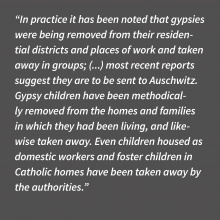 06 | Report by the Berlin-based Katholisches Hilfswerk [Catholic aid organisation], sent to Cardinal Bertram in Breslau and Archbishop Gröber in Freiburg at the end of May 1943
06