Roma in Kosovo: terror and expulsion

It is estimated that around 150,000 Roma (including Albanian-speaking Ashkali) lived in Kosovo in the early 1990s, where they had been settled for centuries and were well integrated. But they were soon caught between the fronts of an increasingly nationalist conflict between Serbs and Albanians. The NATO intervention that began on 24 March 1999, which also involved Germany, was meant to repel the Serb army from Kosovo and put an end to ‘ethnic cleansing’ operations. Albanian extremists used brute force – along with physical abuse, kidnapping, torture, and rape – to expel more than two thirds of Kosovo’s Roma population. Most of the houses belonging to Kosovo’s Roma were looted and then destroyed. The KFOR troops stationed in Kosovo were meant to protect minorities, but they were unable to prevent the crimes.

Most of the displaced persons lived in refugee camps in neighbouring countries; others sought sanctuary in Germany. The Roma who remained in Kosovo live in precarious conditions in provisional accommodation, at constant risk of racist attacks. The situation of many of the refugees living in Germany is by no means secure, with the constant threat of deportation, all the more so since the Bundestag [federal parliament] and the Bundesrat [federal council] declared Kosovo a ‘safe country of origin’ in 2015.

With the support of the red-green coalition government, the chairman of the Central Council of German Sinti and Roma, Romani Rose, visited the historic city of Prizren in Kosovo in October 1999. There he held talks with representatives of the UN mission, the OSCE, the leadership of the KFOR troops, and the Roma minority. Rose called for the Roma’s equal participation in establishing the country’s administration. He also appealed to the German federal government to do more at the international level for the Roma in Kosovo. He added that refugees should no longer be forcibly repatriated to a country that had clearly been ruined by civil war. 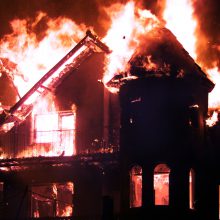 01 | The burning houses of Roma in Pristina, the capital of Kosovo. The houses were torched by Albanian nationalists (26 June 1999). REUTERS/Viktor Korotayev
01 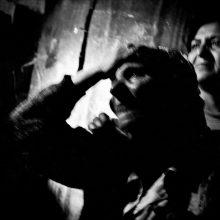 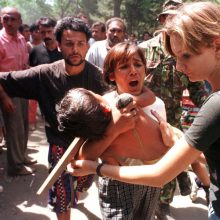 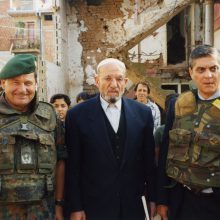 04.1 | Romani Rose (on the right) with the president of the Kosovo Roma Organisation, Haxhi Zulfi Mergia, and a representative of the KFOR troops in Prizren. The destroyed homes of Roma families are visible in the background (14 October 1999). Documentation Centre Archives
04.1 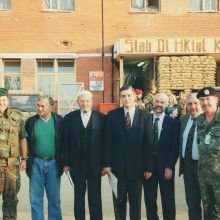 04.2 | In front of the KFOR base in Prizren (on the right of Romani Rose is the legal counsel of the Central Council of German Sinti and Roma, Arnold Rossberg). Documentation Centre Archives
04.2 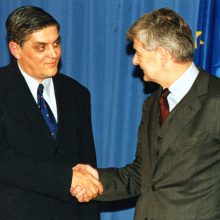