Attempting to return to normality

The concentration camp survivors were literally left with nothing when they returned to their hometowns. Most survivors found that the authorities refused to acknowledge their status as victims of persecution under the Nazi regime. In most cases their belongings, looted or seized, were not restituted either. As a result of their continued exclusion, many found themselves caught in a poverty trap. But a few of these survivors did manage to achieve remarkable careers in post-war Germany. 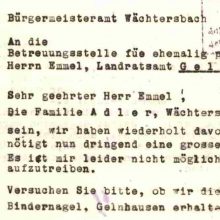 01.1 | Herbert Adler was deported to Auschwitz-Birkenau aged 14, along with his family. The document reveals the material hardships of the first few years after the liberation. The following photograph shows him as an amateur footballer in the 1950s, together with his teammates (third from the right). Institute for the History of Frankfurt, inventory […]
01.1 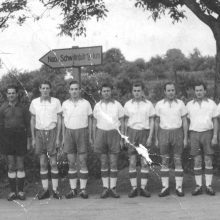 01.2 | This photograph shows Herbert Adler as an amateur footballer in the 1950s, together with his teammates (third from the right). Documentation Centre Archives
01.2 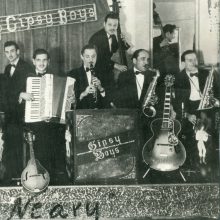 02 | As a young man, Sylvester Lampert was imprisoned in Auschwitz-Birkenau and other concentration camps. He became a well-known musician in post-war Germany and performed under the stage name ‘Heujo Ne’ary’; he even appeared in a number of feature films. The photograph shows him (left, with violin) with his band in the 1950s. Documentation […]
02 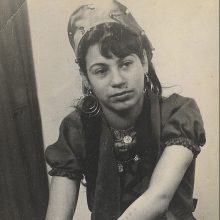 03 | The Munich Sintiza Rosemarie Höllenreiner was deported to Auschwitz-Birkenau aged 7, along with her family. The photograph shows her in a carnival costume in the 1950s. The prisoner number ‘Z-3973’ tattooed on her left lower arm at Auschwitz is clearly visible. The photograph hints at how the trauma suffered in the concentration camps […]
03