With a total population of ten to twelve million, the Sinti and Roma now represent the largest minority in Europe. Many are exposed not just to discrimination, but also to openly racist violence in their everyday lives. Minority rights often exist only on paper. The public perception and media coverage are overlaid with prejudice. The term ‘antigypsyism’ has now gained currency for describing this form of racism directed specifically at Sinti and Roma.

With the strengthening of nationalist and populist movements, the Roma in eastern and south-eastern Europe in particular are faced with growing antigypsyism that is rooted deep in the core of society. The minority serves as a scapegoat for social upheaval, not least in the wake of the economic and financial crisis. 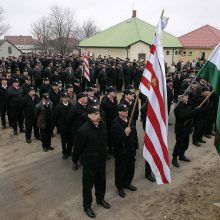 01 | The right-wing ‘Hungarian Guard’ parading in front of a settlement populated by Roma in Tatarszentgyorgy (9 December 2007). The paramilitary association that sprung up from the Jobbik Party was officially banned in 2009, but reformed shortly afterwards under the name ‘New Hungarian Guard’. ullstein bild – Reuters/Karoly Arvai, photo no.: 80086275
01 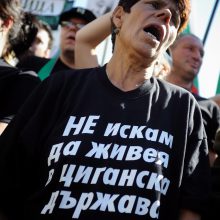 02 | A demonstration against the Roma by the ultra-nationalist and extreme right-wing party Ataka (Bulgarian for ‘attack’) in Sofia on 1 October 2011. The T-shirt reads: ‘I don’t want to live in gypsy land’. picture alliance/dpa, photographer: Vassil Donev, photo No. 27244608
02 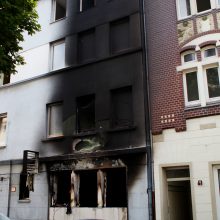 03 | Façade of an apartment block in Leverkusen after an arson attack that was evidently xenophobic in its motivation (25 July 2011). The four-storey building was inhabited mainly by Roma families. picture alliance/dpa, photographer: Oliver Berg, photo No. 26053737
03