Sinti and Roma in the ghettos and forced labour camps

On their arrival at the ‘General Government of Poland’, the depor­ted Sinti and Roma – even the children and the elderly – were forced to carry out the heaviest of hard labour in the camps and later on in the ghettos, guarded by the SS. Their everyday lives were characterised by hunger, cold, diseases and brutal mistreat­ment. Countless people were executed by firing squads.

A few Sinti and Roma managed to escape and survive in hiding in occupied Poland, in permanent danger. Others tried to make their way back to Germany. But most of them were arrested while on the run. 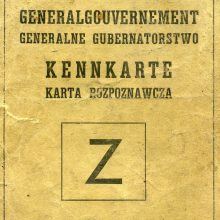 01 | Kennkarte [ID] marked with a ‘Z’ from the ‘General Government’. The document belonged to a deported German Sintiza. Documentation Centre Archives
01 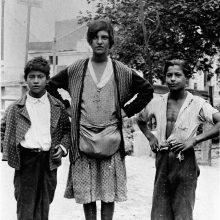 02 | Sinti or Roma children in a ghetto in occupied Poland, c. 1940. The photograph is from the estate of Heinrich Hoffmann. As Hitler’s ‘court photographer’, Hoffmann used photography to showcase the Führer myth. Virtually nothing is known about how the photograph came about. Image Archives of the Bavarian State Library, Hoffmann Photo Archives, […]
02 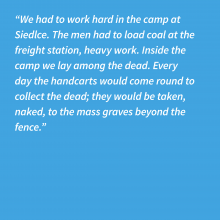