Racial ideology as a state doctrine

After 1933 the Nazi state’s actions were based on the doctrine of racial ‘superiority’ and ‘inferiority’ and the classification into ‘Herrenmenschen’ [‘members of the master race’] and ‘Unter­menschen’ [‘subhumans’]. Like the Jews, the Sinti and Roma were declared to be ‘artfremde Rassen’ – literally: races of a different species or ‘racially foreign’ – and were therefore excluded from the ‘Volksgemeinschaft’ [‘people’s community’]. This policy of exclu­sion and disenfranchisement was bolstered by state-controlled propaganda, which deliberately disseminated demonising images.

The Sinti and Roma, like the Jews, were subject to the discrimi­natory provisions of the Nuremberg Laws. They were declared second-class citizens by the Nazis. Any ties between ‘Zigeuner’ [‘gypsies’] and ‘Deutschblütige’, i.e. persons of German blood, were branded as ‘Rassenschande’ [‘miscegenation or racial defilement’] and subject to severe punishment. 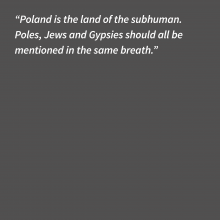 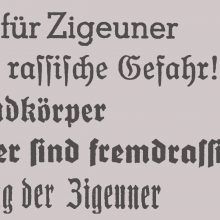 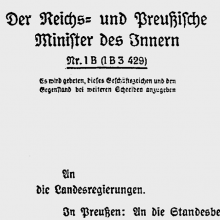 ‘In Europe, other than the Jews, only gypsies regularly belong to the races of a different species.’ Decree on ‘Blood Protection’ by ‘Reichsinnenminister’ Frick of 3 January 1936 Federal Archives, R 18/3514 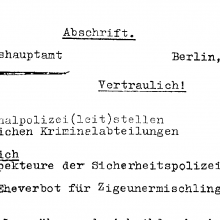 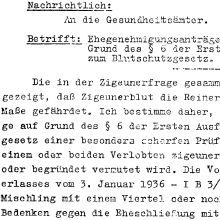 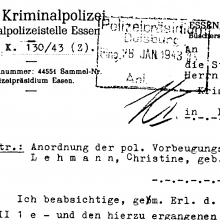 ‘(…) according to which political preventive custody may be imposed in order to prevent further offspring of mixed blood as a result of the malicious continuation of sexual unions among gypsies, gypsies of mixed blood and persons of German blood’ 01 | Christine Lehmann was deported to Auschwitz-Birkenau for breaching the Nuremberg Laws; she succumbed […]
01 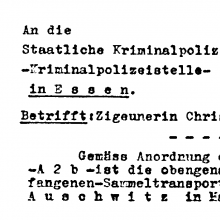 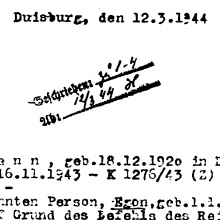 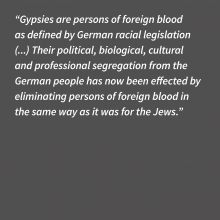 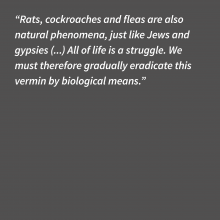 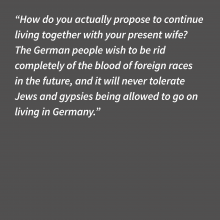