The persecution of the Roma and Sinti in Austria

Following Austria’s annexation to the Reich in March 1938, nume­rous decrees were issued against ‘gypsies’. The focus was on the 8,000 or so Roma in Burgenland, a province which until 1921 had been part of Hungary. One of the driving forces behind the policy of exclusion was Tobias Portschy, Burgenland’s first governor.

On the order of Himmler, hundreds of Burgenland Roma, both men and women, were arrested in June 1939 and sent to concentration camps, among them many young people. Special internment camps for ‘gypsies’ were also set up, the largest of which was in Lackenbach, with a total of around 4,000 inmates. 237 people died there due to the catastrophic conditions, mainly from typhus epidemics. For most of the inmates, Lackenbach was a transit station on the way to the extermination camps. It is estimated that 85 per cent of Austrian Roma and Sinti fell victim to the Holocaust. 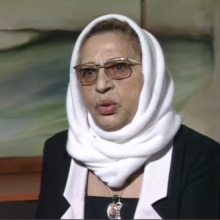 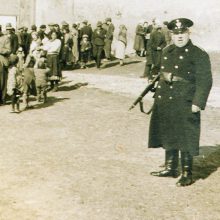 02 | Arrival of the first inmates at the Lackenbach camp, 23 November 1940 Collection of Prof. Leopold Banny, Lackenbach
02 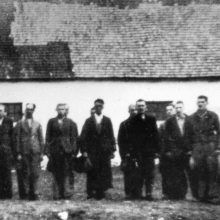 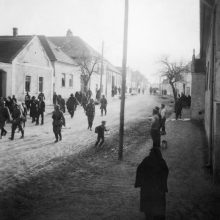 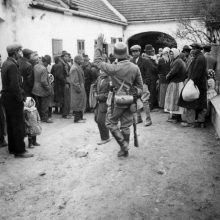 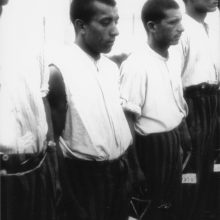 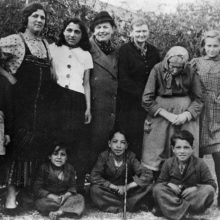 06 | Members of the Stojka Roma family from Vienna with friends, late 1930s. They were deported to Auschwitz-Birkenau in March 1943. The youngest child, Ossi (seated, front left), died there. Karl Stojka (seated, front right) survived and later turned to writing and painting to work through his traumatic experiences. He also campaigned on behalf […]
06 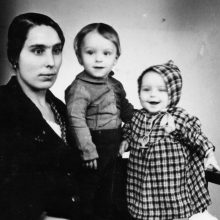 07.1 | Members of the Horvath Roma family from Vienna, all of whom became victims of the genocide Documentation Centre Archives
07.1 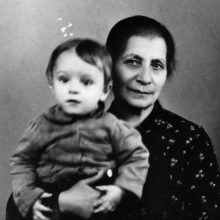 07.2 | Members of the Horvath Roma family from Vienna, all of whom became victims of the genocide. Documentation Centre Archives
07.2 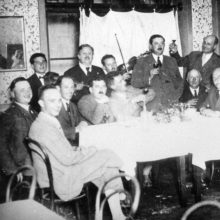 08.1 | Stefan Sarközi (right, on the double bass) performing with his brothers at a party in Unterschützen (Burgenland), home to around 150 Roma. Only eleven of them survived the genocide. Stefan Sarközi, his wife and five of their children – including Irma Sarközi, also pictured – were murdered in the Nazi extermination camps. Cultural […]
08.1 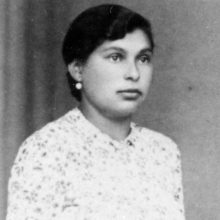 08.2 | Stefan Sarközi, his wife and five of their children – including Irma Sarközi, also pictured – were murdered in the Nazi extermination camps. Cultural Association of Austrian Roma, Vienna
08.2 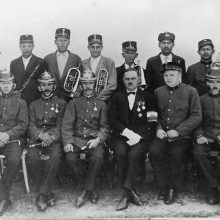 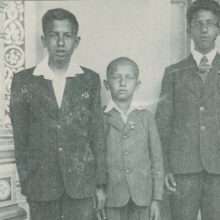 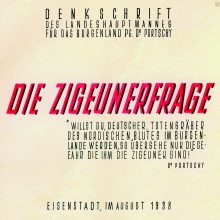 11 | Title page of the memorandum entitled ‘Die Zigeunerfrage’ [‘The Gypsy Question] by the governor of the province of Burgenland, Tobias Portschy, August 1938 ‘Do not ignore the threat that gypsies pose to you, proud people of Germany – unless you, too, want to become the gravediggers of Nordic blood!’ Documentation Centre Archives of […]
11 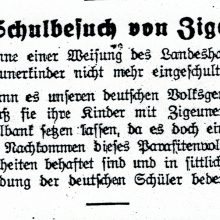 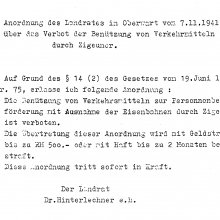 13 | Order issued by the Oberwart chief administrative officer dated 7 November 1941: ‘Ban on the use of public transport by gypsies’ Documentation Centre Archives of the Austrian Resistance, Vienna
13 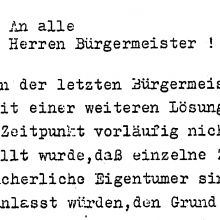 14 | Letter from the chief administrative officer of Oberwart District dated 6 January 1942: ‘Re: gypsy question, solution’ ‘(…) to incite gypsies appropriately to sell their real estate at this stage already. However, this should be done in such a way that they do not become concerned and do not start thinking that a […]
14