The attack in the Austrian town of Oberwart in February 1995

On the night of 4 February 1995, four residents of a Roma settlement fell victim to a targeted bomb attack in Oberwart, Burgenland. It was the worst racially motivated violent crime to have been committed in Austria since 1945.

The authorities investigating the murder soon established a link between the bombing and a series of letter bomb attacks carried out in Austria since 1993 by a suspected right-wing extremist group. It was only in October 1997 that the police arrested Franz Fuchs, a former land surveyor, as the prime suspect. He was sentenced to life imprisonment at the Graz regional court in March 1999; he took his own life in his cell one year later. A memorial was erected in Oberwart in January 2000 to commemorate the victims of the bombing. 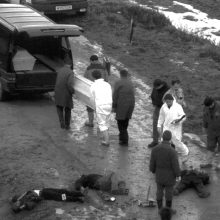 01 | The Oberwart murder victims are taken away from the crime scene in coffins on 5 February 1995. The four men had been trying to remove a sign that read ‘Roma zurück nach Indien’ [‘Roma go back to India’] when a pipe bomb attached to it exploded. picture alliance/dpa, photographer: EPA, photo no.: 1874886
01 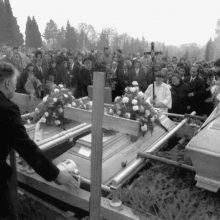 02 | The state funeral for the four murdered Roma in Oberwart on 11 February 1995 was attended by representatives of the Austrian government, the National Council (Lower House of the Austrian Parliament) and the Federal Council (Upper House) as well the government of the Federal Province of Burgenland and the regional parliament. The official […]
02 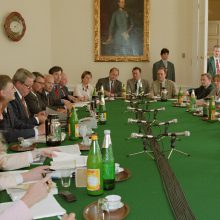 03 | The Austrian Roma were officially recognised as an ‘ethnic group’ in a unanimous resolution of the main committee of the Lower House of the Austrian Parliament on 16 December 1993. The photograph shows the inaugural meeting of the Roma Ethnic Group Council on 5 September at the Federal Chancellery with the then Federal […]
03