Roma in the Łódź ghetto

In November 1941 around 5,000 Roma mainly from the Austrian federal province of Burgenland were deported to Łódź (Litzmannstadt), where a separate ‘gypsy camp’ was set up within the ‘Jewish ghetto’. Within a matter of weeks more than 700 people fell victim to the atrocious living conditions and the outbreak of a typhus epidemic. In December 1941 and January 1942 the remaining inmates were all taken to the Chełmno extermination camp and asphyxiated in gas vans. 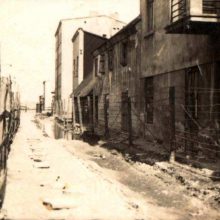 01 | Exterior view of the ‘gypsy’ camp at the Łódź ghetto. There is a handwritten note on the back of the photograph: ‘Double fence and water ditch around the gypsy camp.’ Yad Vashem
01 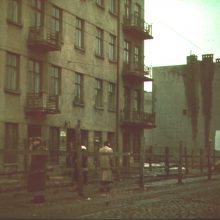 02 | Exterior view of the buildings that made up the ‘gypsy camp’ at the Łódź ghetto. The ground-floor windows were boarded up to isolate the ‘gypsy camp’ completely from the rest of the ghetto. Frankfurt am Main Jewish Museum; photo: Walter Genewein
02 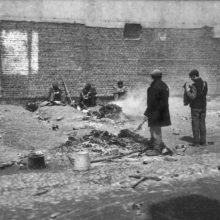 03 | Photograph of the evacuated ‘gypsy camp’ at the Łódź ghetto once the inmates had been transported to the Chełmno extermination camp. Yad Vashem
03 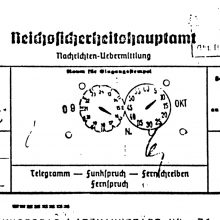 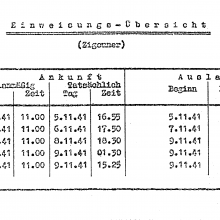 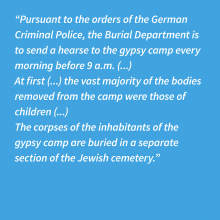 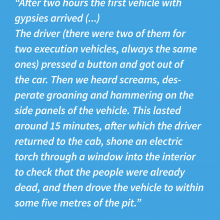 07 | Eyewitness account of Szlojme Fajner, who managed to escape from Chełmno and was murdered at the Bełżec extermination camp in 1942
07